Well where do I start. I've had a ticket for a certain water for a few years that contained a certain carp that I just had to try to catch. It's a large old gravel pit of around 50 acres in size. Gin clear water and full of weed and snags. A proper old gravel pit with some very special carp.  Despite catching many of the carp that the low stock  lake contained I still hadn't had my time with the one I so desperately wanted to catch. I had waded through 40 odd carp from the lake and felt I had been unlucky not to of caught the fish I was after. I really began to feel my name just wasn't on the certain carp.

This was all about to change. I arrived to find the swim I felt I needed to be in taken I had taken annual leave to get a few extra nights in. Luckily the bloke who was in the swim was due to leave that morning so I waited to get in the position I felt that the big girl would come from. I decided to go in fairly heavy on the bait the first night as I had a few nights. My mix consisted of lots of C-Food Boilies of various sizes, hemp and tigers. Lashings of C-Food Concentrate and hemp oil completed the mix I started with around 20 spombs over 3 rods on one spot at range. I was using C Food 15mm pop ups soaked in a special plum flavouring that Steve had lovingly made me. Thanks Steve. I had managed a 32lb mirror from the spot on my last trip out. The first night passed by uneventfully with only a tench and a few fizzers to show for my efforts.  It was around 6pm when I had a few friends down to decimate my tea supplies as usual. I had a stutter resulting in a small tench. I redid the rod and put a further 3 spombs out of the rods. 10 minutes after the re bait  I received a violent take. Picking up the rod I was instantly met with a firm resistance and a lot of head shaking. On a long line the fish kited hard for a dot island so I had to apply maximum pressure. The fish did its best to find sanctuary in the island roots but I began winning the battle. It had one last bid to make it around the island stripping line of an extremely tight clutch..I gritted my teeth and held on for life.

Again I managed to stop the fish as it boiled up on the surface under the branches of the island. I felt I was winning the battle but the fish had other ideas, locking me up in weed a few times before I gradually led it to the margin. Big plumes of fizz erupted on the surface and finally a big black back broke the surface. It was at this point a friend saw it was common and I just knew it was the one I so dearly wanted. After a few last minute charges into the weed the fish was finally beaten and I swept it up in the folds of the net. Finally my job was done. The ancient colossal common was mine. For the record she went 49lb 14oz a PB common for me and what a way to do it. The size didn't bother me, it was that carp I so dearly wanted.
I punched the air and spent the evening buzzing my rocker off as moments like this an be few and far between. My ticket runs out in a couple of weeks and with limited time it couldn't come at a better time. The old saying goes (when you're lucky).
Bag a biggun
Craig Runham

In such hard conditions bait selection was going to be key, local reports were saying meat was doing the buisness, I didn't even open my meat and couldn't go wrong with all the hinders baits we had, the groundbait ended up holding a whole of Barbel all day in front of us, backed up with both the pellets and mini dumbbells you could say we cleaned up, 20 barbel and 6 chubb. Far from ideal conditions but baits pulled ot out of the bag. 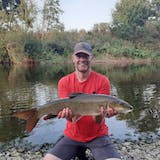 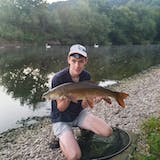 Hi it's been very good