Having prepared everything, cleaned it all twice, tied rigs, bags and attached baits, all was set for the weekend semi-final. Sadly all the preparation was reliant on a good draw, which we didn’t get; coming last out the hat! The swim we had been given didn’t give us much hope either and the amount of fish in other areas of our section meant the chance of qualification was minimal.

Still, we got the rods out on a few known spots and in the searing heat of the day worked hard to try and get a few fish. We baited with a mixture of Hinders Pellets, Mini Munga, boilies and lots of corn. All of this was soaked in Hemp and Salmon Oil. Somehow, at the end of the first 24 hours, we were leading our section with around 6 fish. A small part of us started to believe, but we knew another night of fish was needed; we just weren’t catching in the days and the other competitors were catching us up. At 7pm on the Saturday we began to pick fish up. We had managed 10 fish by the morning and were 100lb in front of our closest competitor. As the light and heat began again, we had 6 hours to wait. Nerves were wracked as we watched fish begin to show and get caught, just not by us!

With the sound of the final hooter we still didn’t know how close it had been. Walking to the final ceremony we confirmed that for the second year in a row, we had qualified for the final alongside some serious angling ability. The names in the final this year are just phenomenal and I personally can’t wait.

Great product which i use for most barbel feeder sessions 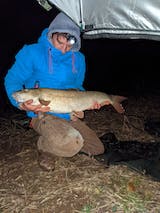 I’ve bought Hinder C-Food the last few time I’ve been up to fish the Wye. Even when conditions and catch reports aren’t looking great, this stuff has produced results every single time. Can’t recommend enough! 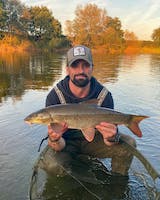 Worked very well all day together with Bags of hinders halibut pellet. The mix worked wonders over 2 days.