I decided this year for a return fishing for the unknown. A very large pit had been calling me back for some time. I decided it was time to itch my scratch and return to a style of fishing that I had missed very much. Fishing for unknown carp and not a single named fish had always been a massive draw for me. Every time the alarm sounds the adrenaline rush is simply unbelievable, it’s the feeling of simply not knowing.

I decided after much consideration to begin baiting heavy a certain swim that had served me well in the past. Two weeks before my first trip I began baiting heavy. I baited each trip with around twenty kilo of a mixture of bait including Hinders Mystic Plum Boilies, Little Gemz Pellets, Hinders Particles and sweet corn. After two bait ups the two spots was becoming noticeably cleaner. By the third the spots had doubled in size. I was gagging to get down and do my first night on the spots. Unfortunately family comes first and it was a little while longer before I finally stuck the sticks in the swim. I arrived to a strengthening wind licking the gravel margins. The weather looked perfect for the baited areas. Three soft hinge rigs where soon deposited on the baited spots rigs were tied with the same reliable products including a size 6 Korda choddy hook tied to a 25lb mouthtrap section. The boom section was tied with 20lb silt semi stiff N trap. I opted for a four-ounce helli safe lead, the heavy weight I felt needed due to the floating weed and the strong wind.  A 15mm Hinders Mystic plum pop up was the hookbait choice. I spread around five kilo of boilies, hemp and tigers over the three spots.

Despite a few bream during the first night I awoke bleary-eyed to yet another bream type bite at first light. I slipped my trainers on and headed to my right rod to deal with another bream. As I neared the rod I noticed the Bobbin was resting on the floor with a limp line hanging from the tip. I plucked the rod from the rest and started winding down. Suddenly the line cut up through the waves by the time I connected with the unseen fish it had travelled over seventy yards away from where it had made the mistake. The rod hooped over and I knew I was now connected to a carp. Instantly after catching up with the carp, I was forced to give line. My legs had now turned to jelly and my legs began to shake as the adrenaline surged through my veins. Gladly the fish came to a halt with a large boil on the surface out in the waves. The rest of the fight was done all up on the surface and a few times I could make out a very large tail hitting the surface. Considering the first initial run I was surprised how easy the fish came in and within a few minutes, it was sulking in the net. I hurried in parting the mesh and peered in at my prize. A cracking dark mirror with a massive tail peered up at me. The fish went mad in the net for a few minutes before I lifted it onto the mat. On the mat I instantly thought the mirror was easily over the thirty pounds barrier but obviously recently spawned out she went just a shade under thirty. The hook hold was incredible with the size six choddy over an inch back. These big carp feed with ferocity. There is a good chance this fish had never been caught before and that to me is special. I watched the long mirror swim off into the depths realising how lucky I had been. What a start on a massive inland sea.

By lunchtime, the wind had seriously strengthened and I kept thinking how good it was looking for another. The middle rod signalled a take from hell with no warning. The alarm struggled to keep up with the ferocity of the take. The rod was buckling in the rest as I ran down to the rod. I grabbed a hold of the rod and was once again forced to give line. Once again that adrenaline was pumping through my veins. This fish was different to the first and thought like a demon.trying to ditch me into the island and every marginal snag there was. It really was a scary fight and I was very glad as the fish drifted over the cord of the net. Once again I guessed the fish was over thirty this time a common with super characteristics. With a few scars showing it’s age and a tiny beaked mouth. It felt so old in my hands. Once again the big pit had given me one of its true jewels. Once again due to recent spawning on the scales the fish registered twenty eight and twelve ounces. I was over the moon with my first trip on the monster sized pit. I managed several more bream and lost another special carp a few days later.

Can’t wait to get back down the big pit for another trip. Meanwhile I’m continuing with the baiting to bring those carp to me. 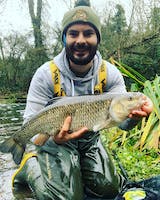