Getting fish to compete amongst themselves for available food in the swim will almost lead to catching more as they throw caution to the wind in an attempt at beating their neighbours to every last bit! The other important aspect to getting bites long term is holding the fish in the swim for as long as is possible; you literally need to have them grubbing around for every last morsel. Large baits are easier to clear faster, so the use of small baits is a far better choice, and they can also be fished little and often, causing less swim disturbance but at the same time holding the fish for longer periods. Small feed pellets are the absolute killer for this type of fishing, and the 2.3 mm pellet we use is particularly appetising, even more so when treated with a couple of our outstanding flavours.

Application though is the key and the following are a few methods worth trying, depending on how and where you are angling. I always like to spread these type of feeds as it means they have to move around more to find the food items, which also improves on catching. If permitted distance wise and weather wise, I would use a baiting pole system, with a small feed head, or if using a large spoon then only partially fill, you don’t want mountains created! Spombing does work as well, but again little and often is better than one big hit fill.

Sticks and bags are also good, but a good tip is to load a few smallish bags up with the pellets and a suitable (dry) stone inside and catapult them into the swim. The splash can act as a n attraction in its own right.

We have two incredibly attractive 2.3mm feed pellets, namely the new devastatingly instant C-FOOD Blend, which has been thoroughly tested for nearly two years now. A very pungent combination of natural and nature identical flavours and feed stimulants the C-FOOD can be used all season due to the inherent water-soluble factors in it’s make up.

Then we have the historic, cold water favourite probably of all time TUTTI, this is the original version still made for us, and its powerful fruity esters really work through the water column, in even the coldest temperatures. It may seem a strange one, but they also work well in combination 2:1 in favour of C-FOOD. Whichever you try you are sure to get the fish grubbing and have an action packed session

Fished with the Tutti Frutti groundbait now in two club matches, both times on unfavoured pegs and come away with two wins. The groundbait really does seem to have extra drawing power.

used two sizes yesterday at emerald pool fishery somerset 2.3mm added to my supercharged method mix and 6mm over the top of my polaris float worked a miracle as my stepson who was in peg next to me couldnt catch a fish but i caught 3 carp with ease he's now told me he's going to order some for next time we go fishing lol 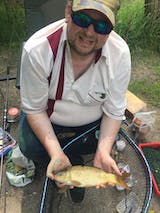 I have been a user of hinders baits for many years... I have occasionally strayed to other suppliers but always returned. It is a question of confidence. Like Goldilocks porridge, the baits are not too strongly fkavoured or indeed lacking in aroma. They are, in my opinion, just right and well worth the fifty mile drive to get them!
As for service, recently started using the mail order, something i have rather shied away from in years gone by. My worries were groundless; boxes of baits arrive promptly in secure packaging - my son who lives even further from Swindon has also started buying hinders!
Top quality bait from a top quality company - and at a reasonable price. 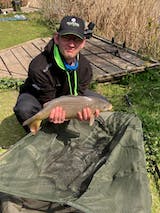 I had a 20 fish hit on a day session with
The tutti pellets,
Ideal for quick hit fishing,
Best fish was 17lb
Not bad for a day,
I find these pellets work really well especially
On match venues where the fish seam to be
Conditioned to this kind of feed,
I am an old school tutti fan all round,
Don’t overlook one of the most productive
Baits out there.