Just back from a memorable session on Mallard Lake at the Bluebell complex.
Mallard is around 25 acres with a big stock of fish up to 48lb, the lake is extremely weedy with very heavy beds of Milfoil and Canadian pond weed which can cause problems in certain swims.
I turned up on Saturday afternoon expecting it to be very busy, however when I got there I was pleasantly surprised to see that the lake was only about half full.
I started on the back of the wind, got the marker off the barrow and after 3 casts I knew I needed to move as I struggled to reel in a bare zip lead so I thought getting a fish in would be a real problem!
I loaded the barrow and walked round to the east bank, the wind was absolutely savage with gusts up to 60mph adding to the challenge, I dropped in a swim about halfway along the bank and sat there and watched. Within about 5 minutes I must have seen over 30 fish show, so that made my decision an easy one! I'd also fished that swim a couple of times previously so I had a very good idea of what was in front of me.
Within a couple of casts I found a lovely bar which was around 12ft deep and dropped down to 14-16ft either side of it and with the fish still showing I was feeling extremely hopeful. I decided to fish 3 rods on the spot but started out with 3 different presentations to try and gauge what may work. I went with a solid bag, and 2 leadclips, one baited with an XO Carp pop up, the other with a Mystic Plum/Cherry Bon Bon snowman.
As conditions looked bang on i decided to give them a bit of a hit of bait, so I put out around 4kg of maize, whole and half Mystic Plum and Flatz pellet. I avoided using particle purely because with a 60 mph crosswind I was concerned that the smaller particles would separate and drift off the spot, so I chose baits that would get down to the deck a lot quicker.
I'd literally just finished spodding and the solid bag rod way away, unfortunately after about 5 mins the fish buried itself in a massive weed bed and the hook pulled, gutted! I got the rod straight back out followed by another 7-8 spods and the bag rod was away again, and again the fish found the thick weed and I suffered another hook pull!
I knew a change was required and although I'm not a big fan of dropping leads, I felt this, and upping the hook size to a 4 may help. I reeled in the other 2 rods and changed all 3 rods over to solid bags (which i dunked in Fish Pro mixed 5050 with Salmon Oil) with drop off leads and fresh rigs baited with esp corn stacks soaked in Betalin.
Just before it got dark I had another take and this time I had no issues landing a nice little stocky of around 12-13lb.
The night was pretty quiet, other than a stunning linear of just under 20 at around 3am. I then put another 15 spods out and tried to get back to sleep as I'd only had about an hour so far and was starting to really feel tired. My alarm which I'd set for 5am then went off, I dragged myself out and made a coffee and sat watching the water. 10 minutes later the session really kicked off!
All 3 rods went almost at the same time! I landed all 3, one of them being a decent common which went 23lb 12oz. This was then quickly followed by a double take with another couple of small doubles.
As midday was approaching I was running out of bait, I'd taken about 15kg with me and I never usually use anywhere near this much on a 24hr but as I kept feeding the bites kept coming!
After I'd run out of loosefeed, some fish were starting to show elsewhere near another spot I'd found which was at longer range so I just chucked a solid bag out at the shows. This was only in for about 10 mins and this time I was connected to a much better fish which fought like a demon for a good 15 mins before it hit the back of the net. On inspection it was an absolutely immaculate dark chestnut coloured common, and this was the icing on the cake as far as this session was concerned, she spun the scales round to 28lb exactly and I was made up!
Everything was really starting to take it's toll on me now, doing all my own self takes and constantly baiting and redoing rods, but I mustered the energy to recast the rod and ended the session with a 21lb 10oz stunning apple sliced mirror. Solid bags were the killer tactic and this accounted for all the bites, the bag mix consisted of Mini Combo, Summer Bag Mix soaked in Fish Pro and Salmon Oil and I was giving the bags a good dunk in the fish pro for added attraction, but also to make sure a single bag hit the deck before it melted.
I ended the session with 17 carp, 3 of them 20's and a tench, with just the 2 lost fish at the start of the sesssion, which has to be one of the best red letter days I've ever experienced, and to do it on the amazing bluebell complex made it all the more special!
Thanks for reading and tight lines!
Paul

The item itself is fine but it's very expensive. I have used aniseed for yrs in bait and had to add more of my own mix to the punch crumb to make it stand out. Knowing the price of ground aniseed per kilo I feel more couid be added to the product to make it better value for money. Just a thought 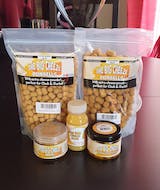 I've used betalin for more years than I can remember, although I have tried other options over the years nothing has been as great