Whilst sat at work watching the most mundane trainer talk me through how to do first aid, the remaining nine lads had arrived at the banks of Oak Lake on the Coking Farm complex in Dorset. A social trip for a friend Chris's birthday had been arranged for some time and with excitement, I am told the lads all walked around the lake pointing out likely looking areas. Meanwhile, the trainer had managed to let us escape for lunch and I quickly text through my swim choices in readiness for a draw which would decide from where each angler would fish. Judging the wind and conditions as well as the lakes topography, I was happy with my choices, even though i'd only fished the place once and knew relatively little about it. Watching the texts come through, the first one read something akin to 'the draws about to start'.

Around 10 minutes later I was pretty confident I hadn't come out anywhere near the top and was preparing for a bum draw! When I was text through that I came 8th out of 10 this didn't surprise me. What did was that I'd managed to get my first choice swim! I managed to stay awake through the afternoon droll and then hot footed it out the station towards Dorset. Two and half hours later I finally pulled in the gates to be met with a torrent of rain and wind. A fish had been caught already however, a lovely double common from the swim to my right which gave me confidence.

I immediately got out and set the brolly up, forcing the storm poles deep into the ground to ensure it held in the increasing wind. With only an hour of light left, it was a super quick set up and as I settled in chatting to the guys along my bank, I was confident of a take. We awoke on the Saturday morning however, with still one fish to show for the efforts of all ten anglers. The weather had improved however and as the sun broke the clouds, bites began to come. Jae Wright was fishing tight to the back of an island bay and managed to flick solid bags of Hinders Pellet with some Tails Up fruit criticals with great success. Three fish came during his morning and although small he was a happy chap with some nice upper doubles to his name. The wind was pushing steadily to the south and in the north west corner, James Bell had a fast take from an open water spot.

A Tails Up Pro Marine hook bait had done the trick and after a short scrap, a pristine 34lb mirror managed to be held aloft for some impressive photos in the sunshine.  Still with nothing to report our side, the anglers opposite; Jae and Danny managed a string of fish throughout the day, Jae's biggest topping 27lb 12oz Finally after becoming a tad concerned, my middle rod on a solid bag of HindersLittle-Gemz and a Tails Up pink wafter took off and I managed three fish in quick succession, all of which were 20lb+. The biggest, a common, weighed in at 25.10 and I was a happy chap going into the evening.

Tactics wise, it was all very simple really. A 3oz inline pear tied to some Korda Ntrap with the coating peeled off meant a short 3 inch braided rig was placed inside a PVA bag of theGemz 50/50 from Hinders. I am also happy using either the Kurv shanks or the Krank hooks from Korda inside the bags, but on this occasion with Coking being a barbless venue, I felt the Kranks leant themselves to having a wider gape and more opportunity of staying put in the carps mouth. After a lovely BBQ and a few drinks to celebrate Chris's birthday, we all settled in. Jae continued catching until around midnight totalling an impressive nine carp and I also managed another 20.02 mirror. At first light the fish seemed to swap sides of the lake and other tan Danny chipping in with a lovely 25lb common, our side of the lake suddenly produced a few fish.

I managed a lovely 23lb mirror and 'Bubs' to my right managed two lovely commons of double figures. The birthday boy Chris finally managed to pick a fish up, again fishing tight to the island with a Tails Up marine hook bait, topped with a pink sighter and of course a Hinders pellet mesh bag to accompany it. He was ecstatic with a 18lb+ common and it was a great way to finish a very enjoyable weekend. The weather became worse and worse on the final morning and with some very soggy gear we packed away. Coking is a fantastic little venue and I'm sure if it wasn't so far away I'd fish there much more regularly. We totalled 22 fish for our 48 hours and I was more than happy with my average of 5 fish and 5 20's. It has a great stock and is well worth a visit using the tactics detailed above.

Caught three fish on my syndicate using a mix of tigers and boille added the tutti oil to my spod mix three fish two of them 10 minutes apart.

As usual, all of the hinders blitz range doing the business on all river all year round! I wouldn’t use anything else! 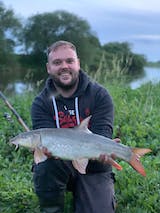 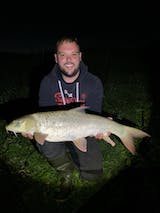 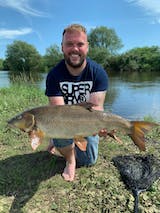